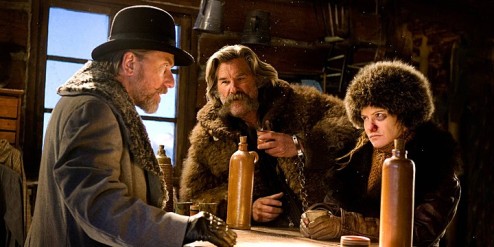 Because at the end of the day, a New Tarantino is a New Tarantino and nothing can take that away from me.  I still felt the buzz driving to the cinema.  I still felt the buzz of being in the cinema.  Yes, Tarantino may have lost his edge.  He’s still head and shoulders above the rest of the competition.  His ear for dialogue may have gone.  It doesn’t matter.  He’s still the master storyteller.  And thank fuck he decided to exempt himself from acting in this one, relegating himself to the brief role of narrator.  Never before have I been so excited and intrigued by the sight of a single jelly bean lodged inbetween the floorboards.

It’s some people.  In a shed.  Being tense.  That’s basically all there is to it.  It’s great.  It has shouty Samuel L Jackson.  It has some civil war unfinished business.  It has a ‘Red Apples’ moment so people can feel sophisticated by recognising  Tarantino’s calling card.  Ooh, and look at the snow – outside!  Looking pretty. Cinematography and that.  Great, innit?

The Stephen Fry quote (about PG Wodehouse) comes to mind – “You don’t analyse such sunlit perfection, you just bask in its warmth and splendour.” Wodehouse and Tarantino don’t sound like they have much in common.  They don’t.  But they’re literary and filmic comfort food for the soul.  Fry’s right. Don’t analyse it.  Just bask in it.

Over the three-plus hours, there’s actually very little action.  Just little doggies, barking all day.  Ramping up the tension.  Tarantino must be doing something right.  Roll on number ten.